RSA has released a white paper -Growing Pains - examining the current shape of the economy and barriers to growth for SMEs.

David Swigciski, SME Trading Director at RSA, comments: “The UK is a great place to start a business, but our research reveals that survival rates are low. The recession has had an unsteadying effect on SMEs and we need to work hard to rebuild their confidence.” 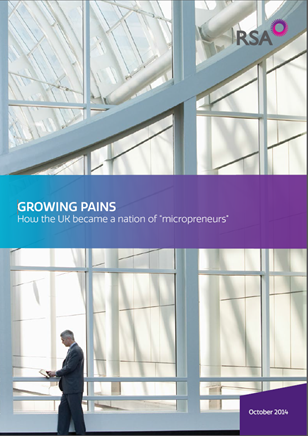 Beyond survival, businesses also face considerable challenges in achieving growth. Two thirds (63%) of small business owners admit that it is difficult to grow their firm. This rises to four fifths (80%) in London and the South East, and three quarters (75%) in Scotland.

When looking at industry sectors, the highest proportion of businesses finding it difficult to grow are commercial and residential landlords (80%), retailers (67%) and personal services (65%), including hairdressers, beauty salons and dry cleaners.

Three fifths (61%) of small business owners also lack confidence in their ability to achieve three- year continued growth. Worryingly, two thirds also (69%) believe it is hard to turn a small company into a medium sized enterprise, and more than half (55%) say it has never been more difficult to grow a small business in the UK.

When asked about their biggest growth barriers, the UK tax system was the most cited concern (44%), closely followed by a lack of bank lending (38%), too much red tape (36%), the cost of running a business (36%) and late payments or cashflow (35%).

Despite reducing bureaucracy being high on the Government’s agenda, a third (33%) of small businesses do not believe its Red Tape Challenge is working, and a quarter (23%) do not even know it exists.

Small businesses’ wish lists for achieving growth include: greater bank lending (41%), reduced employment tax (41%), reduced business rates (39%), less red tape (38%) and reduced energy costs (35%), all of which the Government is seeking to address. When it comes to fuel duty, almost half (48%) of small construction companies said that a reduction would significantly improve their ability to grow, given how vital a commodity this is to their business.

Swigciski continues: “The UK economy relies on a balance between start-ups and high-growth businesses, but our research reveals a worrying imbalance and there remain major barriers to achieving growth. Now is the time for the Government to understand what’s really holding small businesses back and to ensure that they are coming up with the right incentives to drive growth and give businesses confidence. “Unfortunately, Government focus doesn’t guarantee outcomes. For example, despite the Funding for Lending scheme, net lending to SMEs continues to fall, with approximately 50% of SMEs making a first-time borrowing enquiry being rejected.”

Early signs of improvement
As the economic recovery takes hold and gathers momentum, the conditions for business survival appear to be improving.  Looking at firms set up in 2011, there is an appreciable year-on-year increase in the rate of first- year survival, up six percentage points to 93 per cent. However, factors such as a potential interest rate rise still pose a significant challenge to SMEs who are dependent on affordable credit.

Swigciski adds: “There appear to be glimmers of hope for businesses but, understandably, they are erring on the side of caution. In order for them to move forward and grow, they need targeted measures that address their needs at every stage of the business lifecycle – from start-up to growth and expansion.”